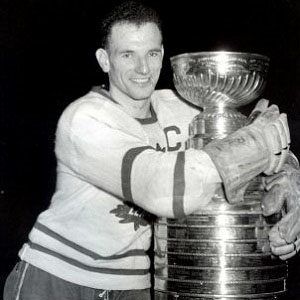 Legendary hockey player who won five Stanley Cups as a member of the Toronto Maple Leafs from 1942 to 1957. He was inducted into the Hockey Hall of Fame in 1966 and is considered by many to be the greatest Leafs player of all time.

His love for hockey was sparked when a family friend took him to see the first two games of the 1932 Stanley Cup Final.

In 1998, a poll of hockey experts conducted by Sports Illustrated rated him as having the best face-off ability of any player in NHL history.

His father died in a hunting accident just eleven days before his birth. His mother raised him and his three siblings as a single mother.

Ted Kennedy Is A Member Of