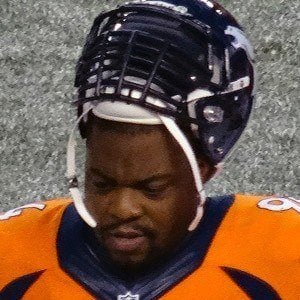 NFL defensive tackle nicknamed "Pot Roast" and known for his time with the Jacksonville Jaguars and Denver Broncos. He made his first Super Bowl appearance following the 2013 season as a member of the Broncos. In 2015, he signed with the Washington Redskins.

He attended Windsor High School in Connecticut, where he also played tight end, and was later named first team All-MAC at Temple University.

He was named to the NFL All-Rookie Team by Pro Football Weekly, the Pro Football Writers of America, and The Sporting News in 2009.

He has a younger brother named Jaden.

He and wide receiver Demaryius Thomas reached Super Bowl XLVIII with the Broncos.

Terrance Knighton Is A Member Of