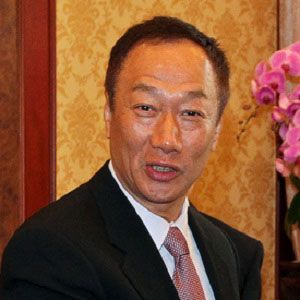 Notable for founding the global electronics company Foxconn, Gou had achieved a net worth of over five billion dollars by 2013.

His Foxconn Technology Group, founded as Hon Hai Precision Industry Co., Ltd., was launched in the early 1970s with only ten employees and just over seven thousand dollars.

His largest-scale factory was established in Shenzhen, China, in 1988. The factory's grounds included living and eating quarters and medical facilities for employees.

His first marriage, to Serena Lin, produced one daughter and one son. His second marriage, to dancer Delia Tseng, resulted in two more children.

He and Ma Huateng both became successful entrepreneurs in China.

Terry Gou Is A Member Of