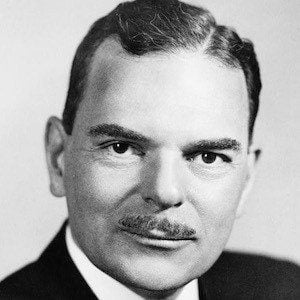 Republican politician who was the forty-seventh Governor of New York from 1943 to 1954. He was the Republican nominee for President in 1944 and 1948, both of which he lost in very close elections.

He fought an epic legal battle with the prominent mobster Dutch Shultz.

One of the most famous pictures in 20th century American history is of Harry Truman, right after he had won the 1948 Presidential election, holding up an issue of the Chicago Tribune which infamously had the false headline that declared that he had beat Truman.

He had two children with wife Frances Dewey; his grandson George became a creative director at McCann Erickson.

President Lyndon B. Johnson offered him any pick of political posts if he came out of retirement, but he declined them all, preferring to remain in the private sector.

Thomas Dewey Is A Member Of