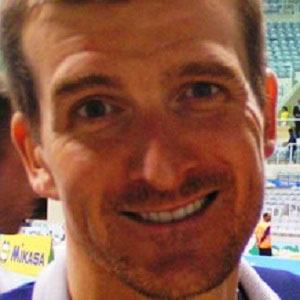 American volleyball player who represented the United States at three Olympic Games, taking home gold in 2008. He previously won the America's Sup in 2005 and 2007.

He was born in Chicago and graduated from Maine South High School in 1991. He later attended Ohio State University for two years before transferring to Long Beach State University.

He was named Best Spiker of the Men's CEV Champions League for the 2008-09 season.

He has daughters with Sandy Mora. He has an older sister named Jennifer and an older brother named Rich.

He was teammates with Clayton Stanely on the 2004 U.S. Olympic men's volleyball team.

Thomas Hoff Is A Member Of