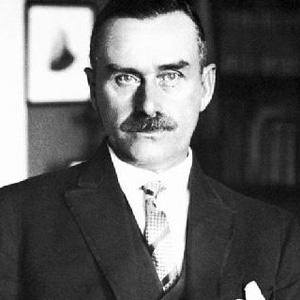 German author of The Magic Mountain and Death in Venice. He won the Nobel Prize in Literature in 1929 and is recognized for his skill in incorporating symbolism, irony, psychology, and philosophy into his novels and novellas.

His short story, Death in Venice, reflected an internal conflict over his own sexuality.

He was born in Lubeck, Germany to Thomas Johann and Julia da Silva Bruhns. Despite his homosexual inclinations, Mann married Katia Pringsheim in 1905, and the couple had six children.

He analyzed and critiqued the work of German philosopher Friedrich Nietzsche.

Thomas Mann Is A Member Of