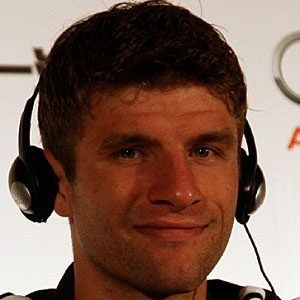 German forward who joined Bayern Munich in 2008 and became a member of the German national team in 2010. He won the Golden Boot at the 2010 World Cup after scoring five goals in six games while leading Germany to third place in the tournament. He then helped lead Germany to a World Cup Championship in 2014, netting another five goals along the way.

He began his youth career with TSV Pahl in 1993, then joined the Bayern Munich youth team in 2000.

He helped lead Bayern Munich to Bundesliga titles in 2010 and 2013.

He joined Bastian Schweinsteiger on Bayern Munich in 2008.

Thomas Müller Is A Member Of