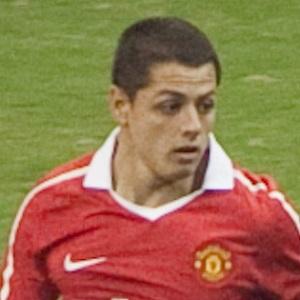 Striker also known as Chicharito, who became the first Mexican player to join Manchester United in 2010. In 2014, he played for Real Madrid on loan for a full season. He's also played for Bayer 04 Leverkusen, West Ham United F.C. and Sevilla FC. In January 2020, he signed a three-year contract with the LA Galaxy, making him the highest-paid player in the MLS.

He began his professional youth career at the age of 15 with C.D. Guadalajara.

He was the top scorer with 7 goals at the 2011 CONCACAF Gold Cup, and was named MVP of the tournament. He debuted for the Mexican national team in 2009 and became one of the all-time leading international scorers for his country.

His father, Javier Hernández Gutierrez, was a Mexican international striker. He married travel blogger Sarah Kohan in March 2019 and on Father's Day 2019, they welcomed their first child named Noah.

In 2010, he made his Premier League debut when he stepped in for Wayne Rooney during a match against Newcastle United.

Javier Hernández Is A Member Of