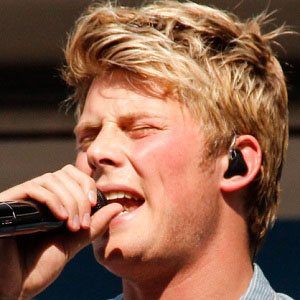 Dutch singer and actor who broke into the entertainment industry when he placed 5th on the 2007 edition of the reality show So You Wanna Be a Popstar.

He was focusing on sports, attending the training school CIOS, but stopped to pursue singing. After Popstar, he released his first single "Wil je bij me blijven slapen op" in 2007.

In 2012, his single "Undercover Lover" was a finalist on the European Union wide Eurovision Song Contest, an annual show that crowns the best singers in the EU.

He was born in Drachten, Friesland, Netherlands.

He continued to climb the charts in the Netherlands when he released "Je bent de hemel," a Dutch version of the song "Yo No Se Manana" by the Nicaraguan pop star Luis Enrique.

Tim Douwsma Is A Member Of