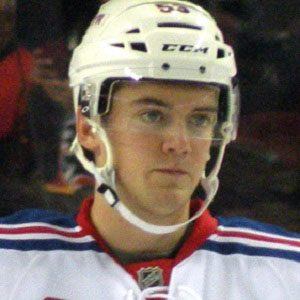 Swedish defenceman who was drafted in the first round of the 2009 NHL Entry Draft and is best known for his years with the Columbus Blue Jackets. He won silver medals representing Sweden at the 2009 World Junior Ice Hockey Championships and the 2011 Ice Hockey World Championships.

He was born in Port Chester, New York and began playing for Skelleftea AIK in the Swedish Hockey League in 2007, when he was 17 years old.

He was named a First Team All-Star at the 2009 IIHF World U18 Championships.

His father played NHL hockey for the New York Rangers.

He was teammates with center Brian Boyle during his time with the New York Rangers.

Tim Erixon Is A Member Of