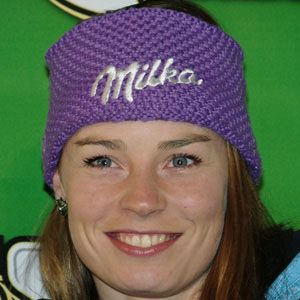 Slovenian ski racer, winner of all five skiing World Cup events, Super-G champion, and the Slovenian Female Athlete of the Year (2005, 2010, and 2011). She announced her retirement in January 2017.

She made her World Cup debut at the age of just 15.

She was the Slovenian flag bearer at the opening ceremony of the 2010 Winter Olympic Games.

She began dating her coach, Andrea Massi, in 2014. They had a daughter together in February 2018.

She is a renowned skier like Olympic gold medalist Lindsey Vonn.

Tina Maze Is A Member Of