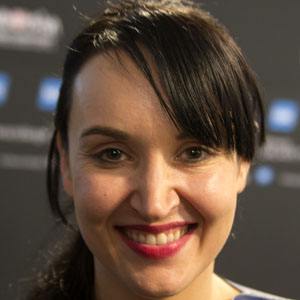 Known for such albums as O-range, Rastemo, and Enigma, this Eastern European pop vocalist also famously performed the song "Moski in Zenska" at the Slovenian Song Festival of 1998.

At the age of nineteen, she won a prestigious honor at the Portorož music festival and went on to record her debut album, Ne Odhaja Poletje.

In March of 2014, she was chosen to represent Slovenia in that year's Eurovision Song Contest.

A native of Koper, Slovenia, she studied flute and music education at the Giuseppe Tartini conservatory in Trieste, Italy. She later settled in the Slovene-Italian border region of Karst Plateau with her partner and two children.

On the invitation of flautist Ian Anderson, she accompanied Jethro Tull on the band's 2004 European tour.

Tinkara Kovac Is A Member Of