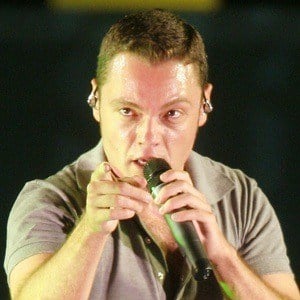 Pop music singer-songwriter known for releasing albums in Italian and in Spanish. He first reached international success with his 2002 song titled "Alucinado." Among his most famous hits are "Tardes Negras," "Perdona," "Rojo Relativo" and "No Me Lo Puedo Explicar."

He played piano, guitar and drums as a child. He joined a gospel choir at sixteen and performed at local karaoke bars.

He won numerous Italian Music Awards, including Best Italian Act and Best Album for Rosso Relativo. In 2001, he performed his song "Soul-dier" for Pope John Paul II at the Christmas Concert in the Vatican where Dolores O'Riordan also performed.

He was born to parents Sergio and Juliana. He came out as gay in a 2010 interview with Vanity Fair. In 2019, he married his partner Victor Allen.

In 2006, he recorded a new version of his song "No Me Lo Puedo Explicar" with Laura Pausini. In 2012, he released the song "Karma" featuring John Legend.

Tiziano Ferro Is A Member Of