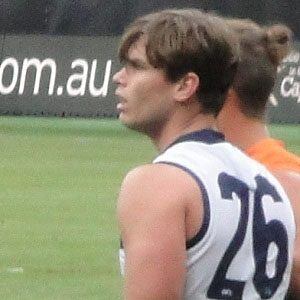 Australian rules football forward nicknamed "Tomahawk" who was drafted by Geelong under the father-son draft rule in 2006. He went on to win AFL Premierships with the team in 2009 and 2011 and received the Carji Greeves Medal as Geelong's best and fairest in 2012.

He played at Finley High School and Melbourne Grammar School. In 2006, he was chosen to play in the Under-18 National Championships and received the Larke Medal as the tournament's MVP.

He won the 2009 and 2011 AFL Premiership alongside Geelong teammate Jimmy Bartel.

Tom Hawkins Is A Member Of