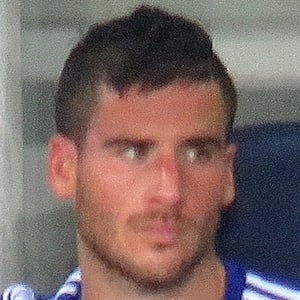 Israeli professional football player who is known for playing with the club Queens Park Rangers in the Championship League. He is also known for his association with the Premier League club Brighton & Hove Albion. He played as a striker for the Israel national team as well.

His youth career started with the Maccabi Haifa academy and in 2005, he joined their senior team. He first began competing on the Israel under 17 national team and joined their first team in 2011.

He won the Israeli Premier League during the 2010 to 2011 season with Maccabi Haifa. He also won Israel's Footballer of the Year  award during his 2017 to 2018 season.

He was born and raised in Kiryat Tiv'on, Israel and shared a photo with his wife and two children to Instagram in September of 2018.

He played alongside Eitan Tibi as part of the 2018 squad on Israel's national team.

Tomer Hemed Is A Member Of