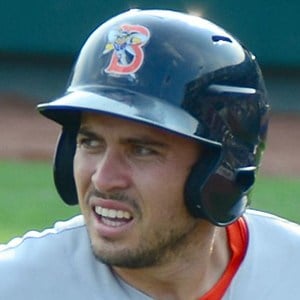 Professional baseball player who is best known for being the catcher for the New York Mets. With a variety of awards and honors, he became known for his defensive catching style and ultimately helped lead his team to the 2011 Team USA Baseball World Cup.

He was selected by the Philadelphia Phillies in the supplemental first round of the 2007 MLB draft. In 2010, he was traded to the Toronto Blue Jays and in 2013 was traded to the New York Mets where he would continue to play as a star defensive catcher.

He has won several awards for his playing including the 2011 Eastern League MVP award and the 2011 Baseball America Award for Best Defensive Catcher of the Eastern League.

He was named Lakewood High School's Athlete of the Year alongside basketball player James Harden. As a player for the New York Mets, he played alongside Noah Syndergaard, David Wright, and Adrian Gonzalez.

Travis d'Arnaud Is A Member Of