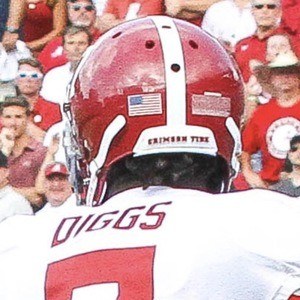 Cornerback who made his NCAA debut with the Alabama Crimson Tide in 2016. He is also widely known for his special teams play, averaging 23.7 per kickoff and punt return during his freshman season.

He grew up in Gaithersburg, Maryland, where he attended The Avalon School.

He has played wide receiver for the Crimson Tide in addition to his cornerback and special teams duties.

He is the brother of NFL wide receiver Stefon Diggs.

He has been coached by Nick Saban at Alabama.

Trevon Diggs Is A Member Of