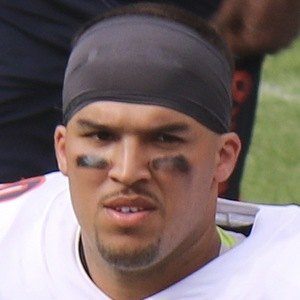 Tight end who signed with the Philadelphia Eagles as an undrafted free agent in 2014. He helped the team win Super Bowl LII, throwing a touchdown pass to quarterback Nick Foles during a trick play in the game.

He played college football for the University of Florida as a versatile offensive player. He played wide receiver, tight end, and quarterback for coach Urban Meyer.

During his 2010 freshman season with the Florida Gators, he set the then-record for touchdowns in a game with 6. He scored his first career touchdown of his NFL career during the 2014 season finale for the Eagles. He was named to the Pro Football Writers of America's All-Rookie Team at the end of his 2014 rookie season.

His parents are Lawrence and Cindy Burton. He has two brothers named Clay and Jake.

He has played as a member of the Philadelphia Eagles' elite tight end corps alongside Zach Ertz and Brent Celek.

Trey Burton Is A Member Of