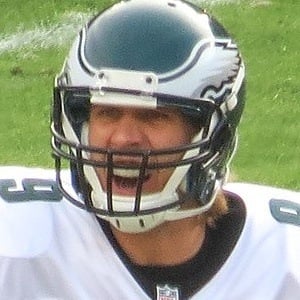 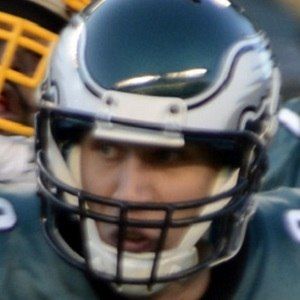 NFL quarterback who was selected by the Philadelphia Eagles in the third round of the 2012 NFL Draft. He led the Eagles to the playoffs in 2013, then had brief stints with the St. Louis Rams and Kansas City Chiefs before rejoining the Eagles in 2017. He helped the Eagles capture Super Bowl LII in 2018, earning Super Bowl MVP honors.

He earned second team All-Pac 10 honors in 2007 while playing for the University of Arizona.

He tied an NFL record when he threw 7 touchdown passes against the Oakland Raiders in 2013. He set an NFL record that same year when he posted a 13.5-to-1 touchdown-to-interception ratio (27td/2int).

He grew up in Austin, Texas, with a brother named Marcus. He married Tori Moore in 2014. They have a daughter named Lily James and a son named Duke Nathan.

He took over as the Eagles' starting quarterback late in the 2017-18 NFL season after an injury to starter Carson Wentz.

Nick Foles Is A Member Of