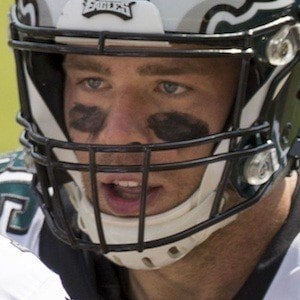 Tight end who made his NFL debut in 2013 for the Philadelphia Eagles, after being selected in the 2nd round of the 2013 draft. His late 4th quarter, go-ahead touchdown in Super Bowl LII helped lead the Eagles to the franchise's first ever Super Bowl title.

He was a dynamic blocking and receiving tight end at Stanford University, where he was a Consensus All-American in 2012.

He was named to his first NFL Pro Bowl team after catching 74 passes for 824 yards and 8 touchdowns during the 2017-18 season. However he didn't play in the game due to the Eagles' Super Bowl run.

He was born in Orange, California, where he was the oldest of four kids. He married soccer player Julie Ertz on March 26, 2017.

At Stanford he caught passes from Andrew Luck.

Zach Ertz Is A Member Of