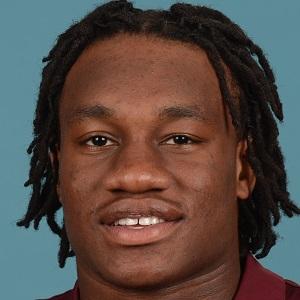 Football player who rose to fame as a tailback for the Virginia Tech Hokies. During the 2013 to 2014 season, he earned a spot on the College Football News All American Freshman Honorable Mention list.

He had a distinguished high school football career at Dan River High in Virginia, earning Super Prep All American and Parade All American designations for his performance as a running back.

While playing football at Virginia Tech, he studied communications and journalism.

He and his two brothers grew up in Danville, Virginia, as the children of Felecia Edmunds and former Miami Dolphins and Seattle Seahawks player Ferrell Edmunds, Jr.

He and Seattle Seahawks player Kam Chancellor both played their college careers at Virginia Tech.

Trey Edmunds Is A Member Of