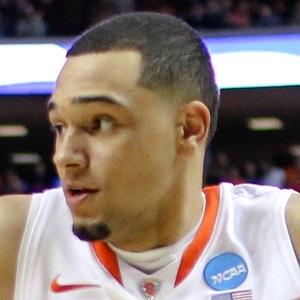 Point guard who was selected 18th overall in the 2014 NBA Draft by the Phoenix Suns. He played one year of college basketball for the Syracuse Orange, earning All-ACC Defensive Team and All-ACC Freshman Team honors.

He was the leading scorer of the 2013 FIBA Under-19 World Championship tournament.

He was a top 10 semi-finalist for the Naismith College Player of the Year award.

He was born in Toronto, Ontario, Canada to Tony McIntyre and Suzette Ennis and raised with two older brothers, Dylan and Brandon.

He and Marcus Smart were two of the top point guard prospects in the 2014 NBA Draft. Smart was taken 12 picks earlier by the Boston Celtics at 6th overall.

Tyler Ennis Is A Member Of