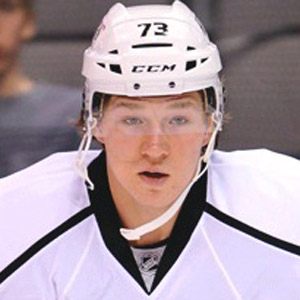 NHL player best known as a member of the Stanley Cup-winning Los Angeles Kings team of 2013-2014. He won the Jim Mahon Memorial Trophy as the highest-scoring right winger in the Ontario Hockey League.

He was born in Scarborough and was drafted 47th overall by the Kings in 2010.

He received the Dudley "Red" Garrett Memorial Award for AHL Rookie of the Year for the 2012-2013 season.

He has dated Taylore Bryce.

He won the Stanley Cup alongside Kings goalie Jonathan Quick in 2014.

Tyler Toffoli Is A Member Of