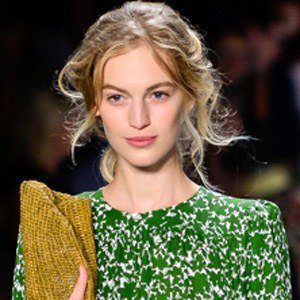 Known for her work in New York, Paris, and Milan, this Hungarian-born model appeared in runway shows for such renowned fashion labels as Prada, Christian Dior, Louis Vuitton, Donna Karan, and Calvin Klein.

After signing in 2009 with the Budapest-based Attractive Models agency and subsequently transferring to VIVA Model Management, followed by DNA Model Management, she made her Western European runway debut in a 2012 Prada showcase in Milan, Italy.

She appeared on the covers of the German and Japanese versions of Vogue in 2013 and 2014, respectively.

She and her sister and fellow model, Benedetta Axente, grew up in Nagylengyel, Hungary.

She and American model Amber Valletta both appeared in Prada's Spring, 2013 fashion campaign.

Vanessa Axente Is A Member Of