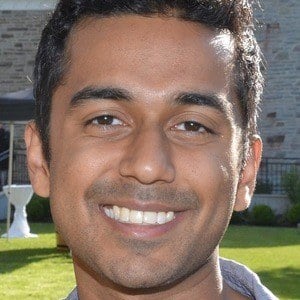 Actor who is widely known for his recurring roles throughout television. In 2017, he began starring on the SyFy original series Wynonna Earp as Jeremy Chetri and the sitcom Workin' Moms as Chad.

He earned his undergraduate degree in political science from York University. He debuted as an actor in the student films Nerdman and Small Fry.

In 2017, he guest starred on the sitcom Schitt's Creek as Gary. He subsequently appeared on the popular BBC thriller Orphan Black that same year.

He was born and raised in Scarborough, Ontario, Canada.

He and Jonas Chernick starred alongside one another on the TV mini-series The Best Laid Plans.

Varun Saranga Is A Member Of