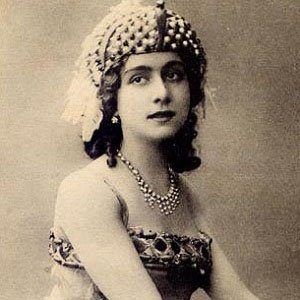 Remembered as both a prominent ballerina and an actress of the silent film era, she was a principal dancer with Russia's Bolshoi Theatre and a performer in Russian silent movies such as War and Peace (1915) and The Dying Swan (1917).

In the early years of the twentieth century, she trained at the Moscow Theatre School and performed with the Ballets Russes company.

The lover of Russia's Grand Duke Dmitri Pavlovich, Karalli has long been suspected as a conspirator in the Bolshevik Revolution-era killing of Grigori Rasputin (the infamous mystic and advisor to the family of Russian Tsar Nicholas II).

Born and raised in Moscow, Russia, she lived in Lithuania, Romania, France, and Austria in the years following the October Revolution of 1917.

She appeared in a 1915 cinematic adaptation of novelist Ivan Turgenev's work After Death.

Vera Karalli Is A Member Of