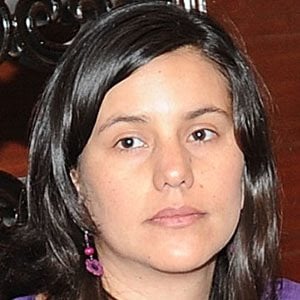 Peruvian psychologist, educator, and politician who is known for having served as a member of congress representing the Cusco constituency. She is a member of the New Peru party after having left the Broad Front movement in 2017.

She attended the Universite Paris Diderot in Paris, France where she earned her degree in psychology. She then went on to earn her Master's degree in Education from the Universidad Nacional de Educacion a Distancia in Madrid. She started her career in politics working with the Peruvian Nationalist Party.

She was featured on Americas Quarterly's list for the Top 5 Politicians Under 40.

She was born and raised in the San Sebastian district of Cusco Province in Peru.

She ran against Pedro Pablo Kuczynski and Alan García in the 2016 Peruvian general election.

Verónika Mendoza Is A Member Of