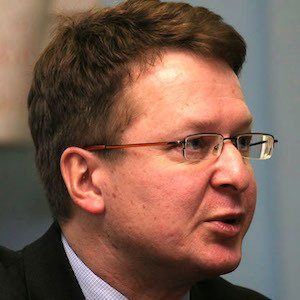 Most Popular#210169
Politician Born in Belarus#8

Belarusian linguist and politician who was the leader of the Belarusian National Front from 1999 to 2007.

He worked as a professor at the Minsk State Pedagogical Institute and the Belarusian Humanities Lyceum.

He and his son were featured in the 2006 documentary A Lesson of Belarusian.

He married a mathematician named Aryna.

He and Alexander Lukashenko are both prominent politicians from Belarus.

Most Popular#210169
Politician Born in Belarus#8