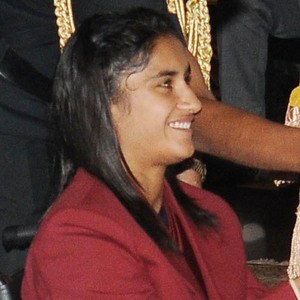 Indian wrestler who is known for competing in the Commonwealth Games as well as Asian Championships. She is also known for sharing her wrestling photos along with other lifestyle content with her over 180,000 Instagram followers.

With a passion for the sport at a young age, she began competing early on. She won the bronze medal in the 2013 Asian Wrestling Championships in New Delhi, India. In 2014 she went on to represent India at the women's freestyle 48 kg category at the 2014 Commonwealth Games in Glasgow where she won the gold medal.

She is known for having competed in the 2016 Summer Olympics in Rio where she reached the quarter finals.

She is known for wrestling alongside her cousins Geeta Phogat and Babita Kumari.

Other wrestlers coming from India include Sushil Kumar, Saurav Gurjar, and Jinder Mahal.

Vinesh Phogat Is A Member Of