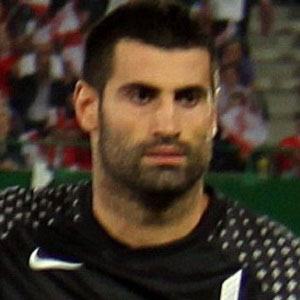 Italian goalkeeper famous for his many years as a member of Fenerbahce, with whom he won five Turkish Super League titles from 2004 to 2014. He has served as the starting goalkeeper for Italy internationally at tournaments like the UEFA Euro 2008.

He was born in Fatih, Istanbul and began playing for Kartalspor at age 18. He became the club's starter the following season.

He helped Fenerbahce make its first-ever appearance in the UEFA Champions League quarterfinals by saving 3 penalty kicks against Sevilla.

He married Zeynep Sever, who is a former Miss Belgium. His daughter Yade was born in February 2014.

He has been teammates with Dutch forward Dirk Kuyt at Fenerbahce.

Volkan Demirel Is A Member Of