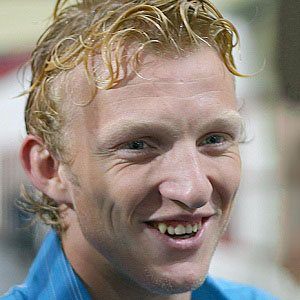 Forward who scored 51 goals for Liverpool between 2006 and 2012 and joined the Dutch national team in 2004; became a fan favorite and was noted for his team spirit, energy, and enthusiasm.

He signed with Liverpool for £10 million after scoring 71 goals in 101 appearances over three years in the Netherlands.

He played for the Dutch national team in the Euro 2008 and 2012 competitions and the 2010 World Cup, where he helped the team reach the Finals where they were defeated by Spain.

His wife, Gertrude, became a darling of Dutch media for her humility.

He and Johan Cruyff both became Dutch goalscoring legends.

Dirk Kuyt Is A Member Of