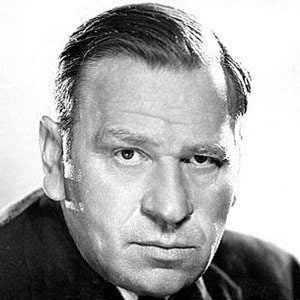 He played Long John Silver in 1934's Treasure Island, and won the Academy Award for Best Actor for his performance in the 1931 film, The Champ. During his 36-year career, he appeared in over 250 films.

He joined the Ringling Brothers Circus after running away from home at age 16, and worked as an assistant elephant trainer for two years.

Before making the transition to sound films, he established a successful silent film career, starring in films such as The Lost World and Beggars of Life.

His brothers were actors and William C. Beery, and his nephew was actor , Jr. He was married twice, first to from 1916 to 1919, and then to Rita Gilman, with whom he had one daughter.

He portrayed Pancho Villa in the 1917 silent film Patria, and in the 1934 MGM hit Viva Villa!

Wallace Beery Is A Member Of