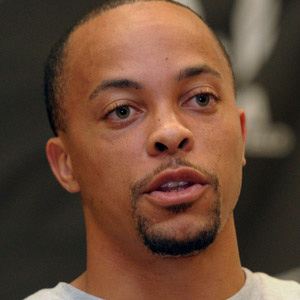 American Olympic sprinter who has become known as one of the best 200 meter sprinters in the world, setting the national indoor record in the event. He is a multiple-time IAAF Continental Cup champion and won his first IAAF World Championship gold medal in 2007, doing so in the 4×100 meter relay.

He graduated from Fayetteville High School before attending the University of Arkansas, where he was a two-time NCAA Outdoor Champion.

He appeared on an April 2011 episode of the popular Discovery Channel series Mythbusters in which he tried to discover whether or not it was possible to run on water.

His friend Usain Bolt is one of the only people in the world who have bested his time in the 200 meters.

Wallace Spearmon Is A Member Of