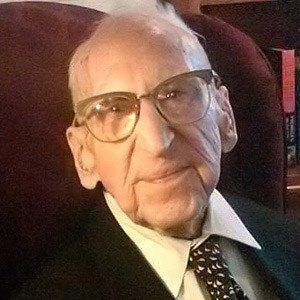 Remembered for being one of the oldest living people, this Minnesota-born supercentenarian died five months short of his 115th birthday. He became one of the world's longest-living human beings in spite of decades of cigar smoking and a colon cancer bout in his sixties.

At the age of seventeen, he began a nearly sixty-year career with the Great Northern Railway.

For the last thirty years of his life, he lived in a retirement home in Great Falls, Montana.

His first marriage, to Agnes Twokey Breuning, lasted from 1922 until her death in 1957. He also outlived his second wife, Margaret Vanest Breuning.

In 2009, at the age of 112, he appeared on a special segment of the News Hour with Jim Lehrer, discussing the current political climate and comparing it to the world of his younger years, in which he voted for Woodrow Wilson and lived through The Great Depression.

Walter Breuning Is A Member Of