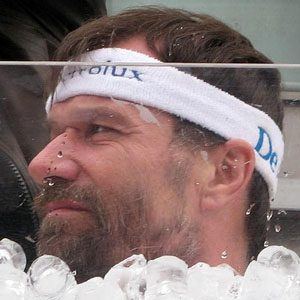 Known for his 2011 book Becoming the Iceman (co-written with Justin Rosales), this Dutch daredevil rose to fame for his unique ability to survive sub-zero conditions through what both he and a 2011 scientific study claimed to be mental regulation of his body's internal temperature.

He completed a marathon in negative four-degree (Fahrenheit) weather and climbed both Mount Kilimanjaro and Mount Everest wearing nothing but shorts. An entrepreneur as well as an adventurer, he founded an organization called Innerfire for the purpose of teaching others his mind-over-body physical regulation techniques.

He and his eight siblings grew up in Sittard, Netherlands. His two marriages produced a total of five children.

He was featured on a 2012 episode of Fact or Faked: Paranormal Files and was determined by the investigation of Lanisha Cole and other cast members to be anything but fake.

Wim Hof Is A Member Of