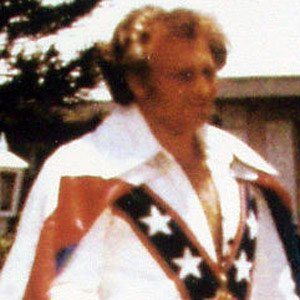 Famed daredevil motorcyclist and cultural icon who jumped over 50 cars at the L.A. Coliseum. He was inducted into the Guinness Book of World Records for having "the most broken bones in a lifetime" after failing to jump Snake River Canyon in a steam-powered rocket.

He earned his nickname while he was jailed next to a man named Knofel (Awful Knofel and Evel Knievel).

He once jumped over the Grand Canyon on his motorcycle.

He was born Robert Craig Knievel, Jr. In 1959, he married Linda Bork, with whom he had sons, Robbie and Kelly, and girls, Tracey and Alicia. In 1999, he'd remarry to Krystal Kennedy for two years before divorcing in 2001.

George Hamilton played him in the film Evel Knievel.

Evel Knievel Is A Member Of