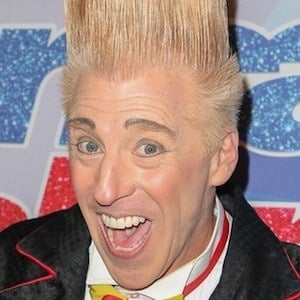 Nicknamed the World's Greatest Daredevil, he was featured in the Guinness Book of World Records for a high wire walk over a cruise ship. Known for his clown-inspired appearance, he was also named by Time as America's Best Clown.

At only three years old, he portrayed the baby on the burning house in the Disney Parade "Dumbo's Circus." At six, he joined a touring production of Peter Pan with Cathy Rigby. Throughout his youth, he would perform with his family as a member of the Nerveless Nocks.

In 2017, he competed on America's Got Talent performing atop a "swaypole." His daughter, Annaliese, performed alongside him.

Born Demetrius Nock in Sarasota, Florida, he is a seventh-generation circus performer. His ancestors founded Circus Nock in Switzerland in the 18th century. He has daughters named Annaliese and Amariah.

Darci Lynne Farmer also competed on the twelfth season of America's Got Talent.

Bello Nock Is A Member Of