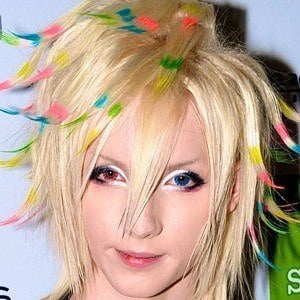 Most Popular#25146
Born in Sundsvall, Sweden#2
Singer Born in Sweden#29

Swedish singer/songwriter best known for an androgynous appearance. He formerly fronted the band Seremedy, which disbanded in 2013. As a solo artist, he is best known for his single "Heartbreak Hotel." He began fronting the band Disreign in 2016.

He started playing the piano when he was 6 years old and later discovered the guitar at age 11. He joined Seremedy when he was just 14 years old.

As a solo artist, he released an EP called Reached the Sky in 2012 and his first full length album entitled Break the Border in 2013.

He was born Kevin Johio Lucas Rehn Eires. He comes from a musical family; his father, Tommy Rehn, is in the band Corroded.

He competed in Melodifestivalen against Robin Stjernberg, the eventual winner.

Most Popular#25146
Born in Sundsvall, Sweden#2
Singer Born in Sweden#29

Yohio Is A Member Of