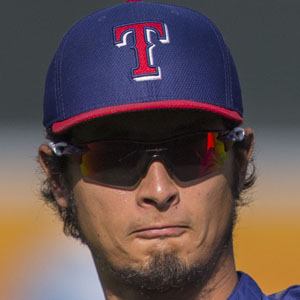 MLB pitcher who joined the Texas Rangers in 2012 with much hype after his outstanding performance as a member of the Japanese national team. He led the American League in strikeouts in 2013. In 2017, he was traded to the Los Angeles Dodgers and he helped the team reach the World Series that same year.

He won Gold for Japan in the 2009 World Baseball Classic game, which was played at Dodgers Stadium.

He had two kids with Japanese actress Saeko; the couple divorced in 2012. He later married and welcomed a son with wrestler Seiko Yamamoto.

He joined second baseman Ian Kinsler on the Texas Rangers in 2012.

Yu Darvish Is A Member Of