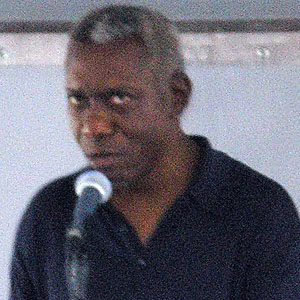 African-American poet and Pulitzer Prize recipient whose works include Copacetic and I Apologize for the Eyes in My Head. The former collection is marked by the rhythms of jazz music; the latter received the San Francisco Poetry Prize.

He was one of five children born to a Louisiana carpenter. He fought in the Vietnam War before studying at the University of Colorado.

He was married to author Mandy Sayer for ten years and later had a child with poet Reetika Vazirani. Tragically, Vazirani killed herself and the couple's child in 2003.

He and Philip Levine were both recipients of the Pulitzer Prize for Poetry during the 1990s.

Yusef Komunyakaa Is A Member Of