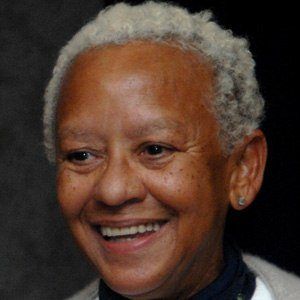 African-American poet, author, and professor known for Bicycles: Love Poems; Cotton Candy on a Rainy Day; and Black Judgement. She also wrote several children's books, including Spin a Soft Black Song and The Sun is So Quiet.

She attended Fisk University, the University of Pennsylvania, and Columbia University.

She was teaching creative writing at Virginia Tech in 2007, when the April 16 campus massacre occurred. Her words, "We are Virginia Tech...We will prevail," became a rallying cry for traumatized students.

She was born in Tennessee, and she grew up in Ohio. She has a son named Thomas.

The National Public Radio program, All Things Considered, commissioned Giovanni to write a poem for the 2009 inauguration of President Barack Obama.

Nikki Giovanni Is A Member Of