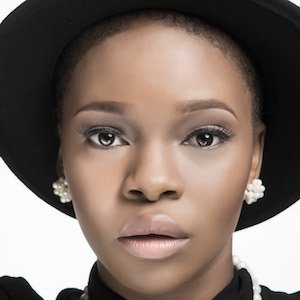 British-Nigerian model and television host who began co-hosting and producing The Spot on EbonyLife TV. She also co-founded an entertainment web series highlighting African culture called The J-ist TV and became a presenter on Jumia TV.

She was 16 years old when she was scouted to be a model by Premier Models Management and would be featured in international campaigns for a number of brands. In her early years, she took part in talent shows and school plays, studied music, and formed an R&B group called Regné.

She earned a Bachelor of Law degree from the University of Kent in Medway after completing her A Levels in law, psychology, and English language and literature at Christ the King Sixth Form College.

She was raised in a large extended family and spent many years growing up with relatives as her mother moved around a lot for work.

She has appeared on the shows Material Girl and Before 30 and in a couple of movies as well, including Christopher Nolan's The Dark Knight Rises.

Zainab Balogun Is A Member Of