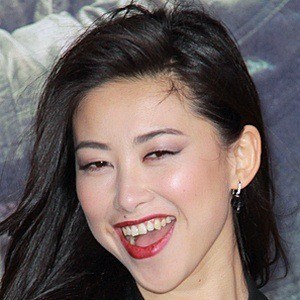 Chinese actress, singer, and television personality who first rose to fame as a host for MTV China. She then began starring in Chinese films like What Women Want and Shanghai Calling before making her debut in American cinema, starring in The Man with the Iron Fists. She also stars as Kokachin in the Netflix series Marco Polo.

Musical from an early age, she began learning piano at the age of three. Into college however, she studied electronics and information engineering at Beijing Technology and Business University.

In 2017, she joined the cast of the Bollywood historical drama Tubelight alongside Salman Khan.

She was born into a military family in Beijing. Her father, Zhu Hanbin, was a businessman and her grandfather, Zhu Xuzhi, was a general in the People's Liberation Army. She dated Italian entrepreneur Lapo Elkann from 2012 to 2013.

Starring in Netflix's Marco Polo, she appeared opposite Benedict Wong and Lorenzo Richelmy.

Zhu Zhu Is A Member Of