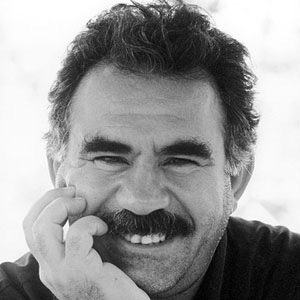 Leader of the Kurdistan Workers Party (PKK), a militant group that has fought for political rights for Jurds in the Turkish state. He became a major political figure even while imprisoned.

Involving himself in politics since his college days at Ankara University, he set up the PKK with fellow students to try carve out an independent Kurdish state within Turkey.

He was captured in 1999 and narrowly escaped execution, confined instead to an island prison; and later on he changed his statement from urging war to calling for peace.

Born with a humble background, he was the son of a poor peasant family in the south-eastern village of Omerli.

In 2013 he and the Turkish Prime Minister Recep Tayyip Erdogan began tentative talks about resolving their decades-longs and bloody dispute.

Abdullah Ocalan Is A Member Of