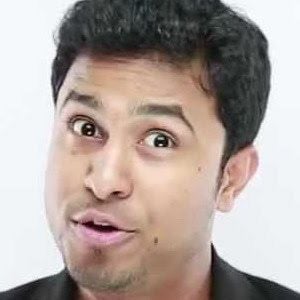 Comedian widely known for his work with All India Bakchod and as the star of Son of Abish, which has more than 1 million subscribers. He's worked with a number of popular Indian comedy companies including East India Comedy and The Papa CJ Comedy Company.

He cites his father's entertaining behavior while drinking as the inspiration for his entrance into comedy. It was his attempt at mimicking his father's behavior that got him into making people laugh.

He was the host of Abish & Friends Hit the Big Time for three years and has performed his jokes internationally from New York to Holland.

He is native to India. He began dating actress Archana Kavi, whom he married in 2016.

Much like Kapil Sharma, he is a popular comedian from India.

Abish Mathew Is A Member Of