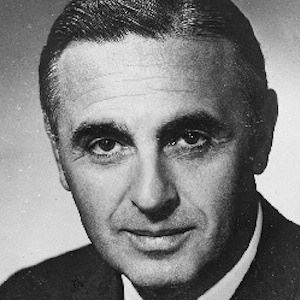 Influential Senator from Connecticut who served for nearly 20 years, involving himself in debates over national affairs like Vietnam. Before he entered the senate he was the Governor of Connecticut from 1955 to 1961.

He worked in his childhood selling groceries and newspapers, and after high school made zippers and belt buckles in a factory to save up money for college.

Although liberal in his politics, he notably rejected a $32 million appropriation to his state for a damming project, arguing the more was more needed for national defense and the Marshall Plan.

He was born in a working class neighborhood of New Britain, Connecticut, his father a factory worker.

Joe Lieberman, a future Senator and Vice Presidential Candidate, worked as a summer intern for Ribicoff - and met his future wife, Betty Haas, there.

Abraham A. Ribicoff Is A Member Of