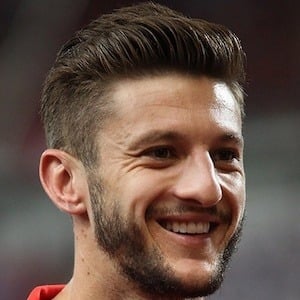 English midfielder/winger who began his professional career with Southampton in 2006. In 2014, he joined Liverpool. He became a member of the English national team in 2013.

He was sent on loan to Bournemouth in 2007, where he made 3 appearances.

He was born in St Albans, England and raised in Bournemouth. He married Emily Jubb in 2013 after seven years of dating. They are parents to sons Arthur Michael and Albie George.

He joined Wayne Rooney on the English national team in 2013.

Adam Lallana Is A Member Of