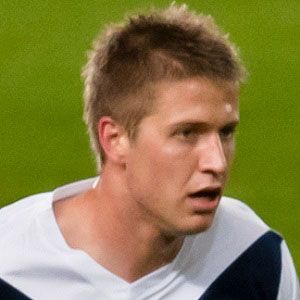 Centre back who has represented his home country of Australia at events like the 2008 Summer Olympics. He has also had very successful years with the Melbourne Victory, winning the A-League Championship and Premiership in 2007.

He played for the SASS Strikers Junior Soccer Club at the Under-10 level.

He was named A-League Young Footballer of the Year for the 2006-07 season while with Melbourne Victory.

His parents are of Dutch and English descent.

He was teammates with Archie Thompson on the Australian national team at the 2008 Summer Olympics.

Adrian Leijer Is A Member Of