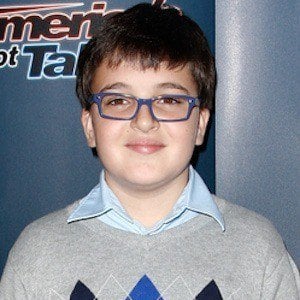 Young pianist who first gained fame for appearing in season 9 of America's Got Talent, and making it to the quarterfinals. He later would win the Lifetime reality competition Child Genius, claiming the $100,000 college fund.

He was at first interested in string instruments from the age of two before developing his passion for the piano. He was featured on The Ellen DeGeneres Show when he was seven.

He is a child genius, and was already in the eighth grade as a nine-year-old. He was accepted into Juilliard School of Music as a classical pianist in 2014.

His mother Olga Romoff began training him on the piano when he was 4 years old.

One of his idols in pianist Vladimir Horowitz.

Adrian Romoff Is A Member Of