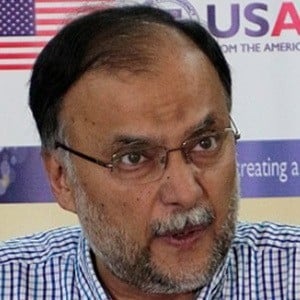 Career politician who rose through the ranks to become a member of the National Assembly of Pakistan in 2018. Previously, he served as his country's Minister for Interior and Minister for Planning, Development and Reforms.

He received his MBA from Wharton School of the University of Pennsylvania in 1986.

From 2013-17, he was the Deputy Chairman of the Planning Commission of Pakistan.

His mother Nisar worked in politics. He has a son named Ahmed.

He held notable cabinet positions during the presidency of Mamnoon Hussain.

Ahsan Iqbal Is A Member Of